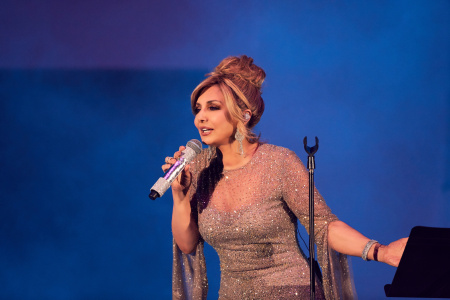 When Googoosh stepped onstage at the Hollywood Bowl on a recent Saturday night, the crowd went wild. Everyone leapt to their feet. Many people cried. A live performance by the pop singer is incredibly rare, despite her worldwide fame.

As a Persian woman, she was banned from singing in public in her home country after Iran's 1979 Islamic revolution. More than 20 years passed before a more tolerant Iranian government allowed her to travel abroad to sing again.

The Los Angeles-based Farhang Foundation sponsored the Bowl show. Farhang’s executive director, Alireza Ardekani, said: “Imagine Beyonce today and suddenly there’s a revolution and she can no longer perform. Or Madonna or any of the top stars. It just must be a horrific thing to go through as an artist. So I have so much respect for her and what she’s been through and how she’s persevered all these years.”

Ardekani proudly added that Googoosh made history as the first Iranian woman to headline at the Bowl.

The pop diva, who is now in her late 60s, lives part time in the U.S. when she is not touring, but she grew up performing in Iran.

Sitting backstage at the Hollywood Bowl before her show, Googoosh described how her late father was an inspiration from the start:

“My father was a comedian, acrobat, performer. And I was his three-year-old partner,” Googoosh recalled. “Then when I start imitating big singers’ songs, my father made me to stay on the stage and sing.”

During her formative years, the singer quickly gained immense popularity in Iran, and even started to influence fashion. Women wanted to dress and style their hair like her. But then came the late 1979 and the revolution.

“On that dates everybody [was] lost,” Googoosh said. “I was in L.A. when [the] Revolution happened. I had [been] invited to perform in an Iranian night club. But I have to mention that in that time, we didn’t have that [many] Iranians here. I found myself almost homeless, without money, without home. I went to New York for a few months. In that timing, the Shah left Iran and [Ayatollah] Khomeini came to Iran. And they called me and said, If you come [home], they’re gonna kill you. But I felt I [was] dying little-by-little here because I didn’t have anyone, anything, anywhere to go. That’s why I decided to go back. Because I didn’t do anything. Why [would] they want to kill me? Life was ended for me. I decided to go and be killed.”

Upon her return to Iran, Googoosh spent time with friends and family. But women were not allowed to sing in public, so that essentially halted her career. For the next 21 years her life as a pop diva disappeared.

Fast-forward 21 years. Around the year 2000, Googoosh got her passport back from a more lenient Iranian government. Since then, the pop queen has toured on a very limited basis around the world, including shows in L.A. at The Forum and Staples Center in the '90s. She emotionally recalled the first time she got to sing again in public after being silenced for so long.

“Oh, yes, I can’t forget that moment,” Googoosh said. “When I came out on the stage at the Air Canada Center in Toronto, I sang a song called ‘Hejrat,’ which means leaving. That was very emotional for me and all the people. I was trying so hard not to cry and keep my voice tuned because I couldn’t help myself. Like now," she said, with tears in her eyes. "When I remember, it makes me emotional.”

Googoosh’s current tour is called The Memory Makers. It’s a fitting name as she performs a spectrum of songs that includes her newer work, as well as the hits stretching back to her early days — all the way back to the time when her parents first give her the Armenian nickname: Googoosh.

Along with her lifelong influence on music and fashion, Googoosh also makes a difference in politics. After being silenced for more than two decades, she is now an outspoken advocate for women’s rights. And in 2016, she released a controversial music video in support of Iran’s LGBTQ community.

It’s that outspoken advocacy that continues to draw new fans not only to Googoosh’s music, but her unbending call to bravery even in the face of oppression. That’s a powerful message for young Iranian women, like Peymaneh Samimi, a student at Pasadena City College who attended the Bowl concert.

Samimi moved to America three years ago to escape persecution as a member of the Bahai faith, a minority religion second to Islam in Iran. Back home, she says she listened to Googoosh’s music — often bootlegged copies — to keep from giving up hope and lift her spirit. Samimi said seeing and hearing Googoosh live was nothing short of a dream come true:

“Tonight was amazing and unbelievable. Especially for me because I had a lot of memories with every song she sang. I grew up with all of her songs. Now, she found a way to come to the United States and again, she’s on the stage. This shows that there is always hope.”

Listen to Marcos Nájera's entire interview with Googoosh below.