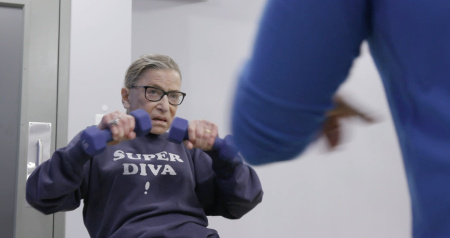 "The Avengers: Infinity War" may still dominate at the box office but "RBG" which opens May 4, tells the story of Justice Ruth Bader Ginsburg as that of a real life superhero.

In 1956, Ginsburg was one of just nine women in a class of 500 at Harvard Law School. She was at the top of her class and one of the 25 students to make the Harvard Law Review, beating out hundreds of men, including her future husband. But there was always pushback.

The 85 year old Ginsburg began her law career at a time when working women were a novelty and female lawyers were practically unheard of. She remembers when the dean of Harvard Law invited her and the eight other women in her cohort to dinner. He wanted to know: "How do you justify taking a spot from a qualified man?"

Filmmakers Betsy West and Julie Cohen wanted their documentary, "RBG," to show the gender discrimination Ginsburg has faced, but they wanted to show her triumphs too. They follow her travels speaking to crowds of adoring fans, many of them millennials, who have dubbed her "The Notorious RGB." They also go inside her gym where she does a rigorous workout with her trainer.

The Frame's John Horn spoke with West about the process and importance of making "RBG." Below are some highlights from their conversation. To hear the full conversation get The Frame podcast.

On Ginsburg's response to discrimination:

She was kept out of jobs, denied an opportunity to be a clerk on the Supreme Court because she had been recommended to a justice who said, "I'm not going to hire a woman." Within a decade of all the discrimination she faced, she was part of a movement to change the discriminatory laws and customs in our country. And ultimately she brought a series of lawsuits that really did force the Supreme Court to look at this discrimination that was out there. Ruth Bader Ginsberg brought it to their attention and had a tremendous impact on every woman in this country.

On the sexism Ginsburg faced throughout her career:

The kinds of casual sexist remarks that were made to her in the course of her work as a litigator appearing before the Supreme Court ... We asked her: "How did you deal with this kind of dismissive remark?" Her response, characteristically, was: "Never in anger." My favorite comment that she made was: "I almost felt like I was a kindergartener, explaining to these justices that yes, discrimination against women exists." It was Justice Ginsberg, then as a lawyer, who was explaining to justices [that] no, women don't have it all. They are not on a pedestal and treated better. The pedestal is almost a cage.

On embracing the "Notorious RGB" meme in the title:

Ruth Bader Ginsberg has become something of a rockstar ... to the millennial generation. So certainly we were using that as a way to get into the story and then present some of the legal battles that she fought earlier on.

Her husband was a very accomplished lawyer. He was a partner in a law firm in New York City. And she says that when he was trying to make partner, his career came first. But as the women's movement ramped up and as she began this initiative to bring cases to challenge discriminatory laws, Marty Ginsberg understood the importance of her work. And he stepped back a little bit and, basically, her career came first. He also did all the cooking. He was a fantastic cook, a very funny guy. She loved his sense of humor and he helped her become a Supreme Court Justice. She says, "There's no question that without Marty, I probably wouldn't have been considered."

This story has been updated.