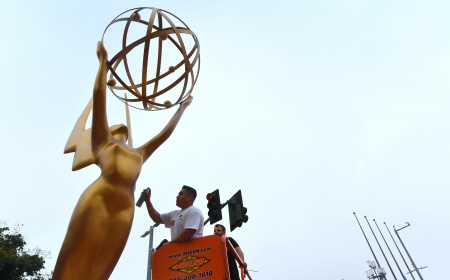 Painter Eddie Garcia touches up a statue of the Emmy Award on Sept. 12, 2017 in Los Angeles, ahead of this weekend's 69th Emmy Awards.; Credit: Frederic J. Brown/AFP/Getty Images

The Frame staff | The Frame

It's Emmy voting time in Hollywood so The Frame has put together its first every Emmy Special, co-hosted by The Frame's John Horn and LA Times television critic Lorraine Ali.

With so much to watch on traditional television and streaming services, the Emmys can be a useful compass by which to navigate what's worth watching in this peak TV era. In this special, we get to know 13 people who are nominated for their work on the small screen from this past year.

Hear their interviews plus what John and Lorraine think the television medium is contributing to our wider culture today.

The nominees featured in The Frame Emmy Special are (in alphabetical order):

Finally, the Special is limited by time but at the end Lorraine and John give shout outs to unsung Emmy nomineees Issa Rae and her show "Insecure" and to the enduring legacy of the late Anthony Bourdain and his show "Parts Unknown."